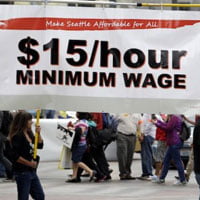 The Seattle City Council unanimously passed an ordinance that would give the city the highest minimum wage in US. Socialist City Council Member Kshama Sawant, who after the council meeting called on the people of America to elect more independent and socialist candidates, said the push for a higher minimum wage is spreading across the nation.

“Seattle may be a hippie city. We may wear socks with our sandals,” but it’s also a city where different progressive groups can work together to bring about change, Sawant said.

The minimum wage issue has dominated politics in the liberal municipality for months, and a boisterous crowd of mostly labor activists packed the council chambers for the vote. They held signs that said “15 Now,” chanted, cheered and occasionally jeered when amendments they favored were voted down.

Mayor Ed Murray, who was elected last year, had promised in his campaign to raise the minimum wage to $15 an hour, as did Sawant in her campaign last year.

“We did it. Workers did this,” she said. “We need to continue to build an even more powerful movement.”

Council Member Tom Rasmussen said, “Seattle wants to stop the race to the bottom in wages” and address the “widening gap between the rich and the poor.”

Seattle activists celebrated a successful campaign to gradually increase the city’s minimum wage to $15 by calling for a national movement to close the income and opportunity gaps between rich and poor.