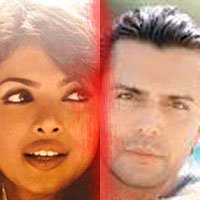 The actress alleges that the biopic, being made by Aseem, deals with her own life rather than Mr Jaju’s.

Reportedly, Prakash Jaju and Priyanka had an ugly fallout in 2004 when the latter had complained against him and Jaju was arrested.

Now, with Aseem confirming to the tabloids that he is making a biopic, which will be based on Jaju`s life, it clearly sends out signals that Piggy Chops too will be portrayed in the film.

Interestingly, reports suggest that PeeCee`s lawyers have taken up the matter and Aseem has been sent the notice already. Well, whether his `Jaju biopic` will ever be made, remains to be seen!

In accordance with Priyanka’s disclaimer, her legal counsel, Anand Desai issued a legal notice stating that his client is shocked to note that all the news articles mention the proposed film as Jaju’s biopic but the promotions largely refer to Priyanka with inclusion of aspects of her and her family life rather than references to Jaju.