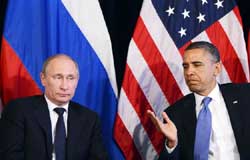 In a rare snub, US President Barack Obama  cancelled his plans to meet his Russian counterpart Vladimir Putin after intelligence whistleblower Edward Snowden was granted temporary asylum by Moscow.

“Following a careful review begun in July, we have reached the conclusion that there is not enough recent progress in our bilateral agenda with Russia to hold a US-Russia Summit in early September,” White House Press Secretary Jay Carney said in a statement today, ending weeks of speculation on this issue.

However, Obama still plans to attend the Group of 20 economic summit in St. Petersburg in Russia next month, the White House said.

“Russia’s disappointing decision to grant Edward Snowden temporary asylum was also a factor that we considered in assessing the current state of our bilateral relationship,” Carney said reflecting on the role played by Snowden’s episode in Obama’s decision to not meet Putin on the sidelines of the two-day summit due to take place from September 5.

Earlier, Obama had said he was “disappointed” that Russia had granted temporary asylum to Snowden, who is accused of leaking highly secretive details about National Security Agency surveillance programs.

“I was disappointed because, you know, even though we don’t have an extradition treaty with them, traditionally we have tried to respect if there’s a law breaker or alleged law breaker in their country, we evaluate it, and we try to work with them,” Obama told to the media in an interview.

“I will be going there (to Russia). I will be going to that because the G20 Summit is the main forum where we talk about the economy, the world economy with all the top economic powers in the world. So it’s not something unique to Russia. They are hosting it this year,” Obama said.

Carney said that the US values the achievements made with Russia during Obama’s first term, including the New START Treaty and cooperation on Afghanistan, Iran, and North Korea. “However, given our lack of progress on issues such as missile defence and arms control, trade and commercial relations, global security issues, and human rights and civil society in the last twelve months, we have informed the Russian Government that we believe it would be more constructive to postpone the summit until we have more results from our shared agenda.”

Carney further added “Our cooperation on these issues remains a priority for the United States, so on Friday, August 9, Secretaries Hagel and Kerry will meet with their Russian counterparts in a 2+2 format in Washington to discuss how we can best make progress moving forward on the full range of issues in our bilateral relationship,” Carney added.