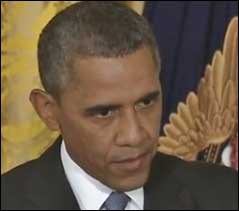 Days after a US lawmaker compared Edward Snowden with Mahatma Gandhi, US President Barack Obama said the former CIA contractor who leaked to the world the secretive internet and phone surveillance programs, is not a patriot.

“I don’t think Snowden was a patriot,” Obama told reporters during a White House news conference.

“The fact is that Snowden’s been charged with three felonies. If in fact he believes that what he did was right, then, like every American citizen, he can come here, appear before the court with a lawyer and make his case,” he said in response to a question.

“If the concern was that somehow this was the only way to get this information out to the public, I signed an executive order well before Snowden leaked this information that provided whistle-blower protection to the intelligence community for the first time,” he argued.

“And a general impression has, I think, taken hold, not only among the American public but also around the world, that somehow we’re out there willy-nilly just sucking in information on everybody and doing what we please with it.

“Now, that’s not the case. Our laws specifically prohibit us from surveilling US persons without a warrant. And there are whole range of safeguards that have been put in place to make sure that that basic principle is abided by,” he said.

Earlier, John Lewis, a senior lawmaker from Obama’s Democratic party had compared Snowden with Mahatma Gandhi, saying the controversial whistleblower was engaged in a “non-violent” act of “civil disobedience”.