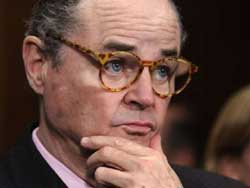 Pakistan’s concerns about India’s presence in war-torn Afghan cities like Kandahar and Jalalabad is simply “exaggerated”, a top Obama Administration official has said.

Coming in the wake of a terrorist attack on Indian consulate in Jalalabad last week, such a statement from the Obama Administration could be considered as significant.

“I think it’s exaggerated… that presence is rather minuscule. You’re talking about a dozen or two-dozen people at most. India has a strong economic and cultural presence in Afghanistan. It’s perfectly reasonable for them to have a diplomatic and consular presence in the country,” Special US Representative for Afghanistan and Pakistan James Dobbins told in an interview.

“I understand the source of Pakistan’s concern. It relates to this issue of cross border militancy. As I’ve indicated the dominant infiltration of militants is from Pakistan into Afghanistan but recognise that there is some infiltration of hostile militants in the other direction as well so Pakistan’s concerns aren’t groundless, they’re simply in our judgments exaggerated,” Dobbins said.

“In order to encourage the Afghans to conclude an agreement with the US and with NATO which will allow a continued military presence to advise and assist the afghan security forces. In this regard India and Pakistani policies are identical” Dobbins said.

Dobbins added that his biggest concerns for both Afghanistan and Pakistan are similar. “They derive from the continued threat of insurgency and militant groups that want to overthrow the government, overthrow the constitutional order, and undermine democracy.

He further added “I think one shouldn’t be naively optimistic about the future but at the same time I think both countries have a capability of overcoming these challenges, particularly if they cooperate. On the other hand if they don’t cooperate, I think for both countries this is going to be a much more dangerous challenge.”