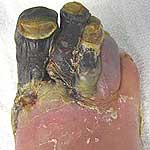 Gangrene is localized soft-tissue death (necrosis) from prolonged blood-supply blockage. It can occur in atherosclerosis, diabetes mellitus, or decubitus ulcer, and after severe burns or frostbite.

Gangrene is a dreadful disease in which the profession has failed to offer much in the way of relief for these patients.

Attempts to treat critical limb ischemia in peripheral arterial disease (PAD) patients with below-the-knee angioplasty are still thwarted by restenosis (the re-narrowing of the artery at the site of angioplasty or stenting), the need for repeat treatments and the continued progression of atherosclerotic disease, leading to tissue death (gangrene) and amputation. Interventional radiologists have been studying a potential solution—the use of drug-eluting stents—and have found that these types of stents lessened the rate of repeat procedures to open these small arteries, according to results presented at the Society of Interventional Radiology’s 34th Annual Scientific Meeting.

“This is encouraging news for PAD patients with critical limb ischemia. The smaller blood vessels below the knee are more difficult to treat due to their size (3 millimeters) and are more prone to reclog than larger vessels. The use of drug-eluting stents in the tiny infrapopliteal arteries of the leg may significantly impact their care,” said Dimitris Karnabatidis, M.D., assistant professor of interventional radiology at Patras University Hospital in Rion, Greece. “Drug-eluting (or drug-coated) stents have emerged as a potential solution to the limitations of endovascular treatment of PAD patients with critical limb ischemia,” he added. An interventional radiologist performs a balloon angioplasty to open a clogged blood vessel and then places a drug-eluting stent in that artery. The stent acts as scaffolding to hold the narrowed artery open. Drug-eluting stents slowly release a drug for several weeks to block cell proliferation or regrowth, thus inhibiting restenosis.

A Northwestern University Feinberg School of Medicine researcher has launched the first U.S. trial in which a purified form of subjects’ own adult stem cells was transplanted into their leg muscles with severely blocked arteries to try to grow new small blood vessels and restore circulation in their legs.

Severely blocked arteries in the leg and sharply diminished blood flow can result in wounds that don’t heal, the breakdown of tissue and gangrene. This painful condition is called critical limb ischemia (CLI) and results in the amputation of more than 100,000 limbs every year in the United States. It’s a serious, emerging health problem that affects 1.4 million people. An estimated 15 percent of the population will have this disease by the time they reach age 70.

The Northwestern-led phase I/IIa study — which will include 75 people with CLI around the country — targets patients who have exhausted all other medical options including angioplasty, stents and bypass surgery to repair blocked circulation in their legs.

“They’re at the end of the therapeutic road and they’re ultimately facing potential amputation,” said Douglas Losordo, M.D., the Eileen M. Foell Professor of Heart Research and principal national investigator for the study. “This is hopefully a way to help them avoid that.”

Researchers at the San Francisco VA Medical Center have uncovered part of the genetic mechanism that causes new arteries to grow in response to blocked arteries. A team led by SFVAMC vascular surgeon Rajabrata Sarkar, MD, PhD, has demonstrated in mice that the MMP2 gene is essential for the growth of new arteries when the femoral (leg) artery is blocked.

The team also identified and described, for the first time, the specific DNA sequences of the MMP2 gene that are expressed when new arteries are grown.

“It is not clear why some patients grow new arteries in response to an arterial blockage and others do not,” observes Sarkar, who is also an assistant professor of surgery at the University of California, San Francisco. “So it’s very important to understand the normal process that allows an animal or a person to grow new arteries when their legs don’t get good blood flow. Legs are a big problem, because if you don’t have enough blood flow, it can eventually lead to gangrene and amputation.”