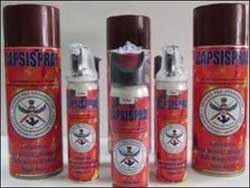 In view of increasing instances of physical attacks on women, the DRDO has developed a chilli-spray for protection using the world’s hottest chilli grown in Assam, Rajya Sabha was informed on Wednesday.

“Yes, Defence Research laboratory in Tezpur has developed a chilli-spray called CAPSISPRAY. It is a non-lethal spray for personal protection and self-defence,” Defence Minister A K Antony said in reply to a written query.

“It contains Oleoresin Capsicum extracted from world’s hottest chilli Bhut Jolokia, largely cultivated in Assam and other parts of northeast,” he said.

The Minister was asked if the spray was developed in view of growing instances of attacks on women.

“The prototype of the chilli spray is ready and the product is required to be tested for several toxicology parameters. DRDO will take further steps to popularise once trials are over,” Antony said.

Meanwhile, answering another query, the Defence Minister said FDI up to 26 percent is permissible in defence sector, subject to licensing.

“However, whenever FDI beyond 26 per cent is likely to result in access to modern and state-of-the-art technology in the country, decisions can be taken to allow higher FDI on a case-to-case basis with approval of the Cabinet Committee on Security,” Antony said.