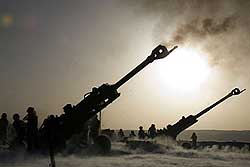 The US has decided to sell India 145 state-of-the-art 155mm towed Howitzers to India worth about USD 885 mn to improve the security of an important partner for political stability, peace, and economic progress in South Asia.

The US Department of Defense had on 2nd August notified the Congress about the proposed sale.

The estimated cost is USD 885 million, it said.

“This proposed sale will contribute to the foreign policy and national security of the United States by helping to strengthen the US-India strategic relationship and to improve the security of an important partner which continues to be a …for political stability, peace, and economic progress in South Asia,” the Defense Security Cooperation Agency (DSCA) said in a statement this week.

India intends to use the Howitzers to modernise its armed forces and enhance its ability to operate in hazardous conditions, DSCA said, adding that India will have no difficulty absorbing these weapons into its armed forces.

“The proposed sale of this equipment and support will not alter the basic military balance in the region,” it said.

DSCA said implementation of this proposed sale will require annual trips to India involving up to eight US Government and contractor representatives for technical reviews/support, training, and in-country trials for a period of approximately two years.

There will be no adverse impact on US defense readiness as a result of this proposed sale, it said.

The M777 155mm Light-Weight Towed Howitzers made its debut in the war in Afghanistan.

In addition to the United States Army, it is also used by the Australian and Canadian armies. Saudi Arabia has also ordered for M777 Howitzers.