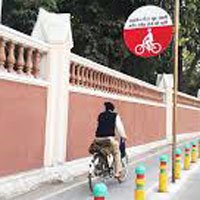 Maharashtra state government has taken an initiative to encourage use of bicycle by intending to create cycle track through ‘streets with cycle track’ project starting from smaller cities instead of congested city like Mumbai.

The pilot project ‘streets with cycle track’ will be implemented in 10 cities across the state such as Pune, Nagpur, Nashik, Kolhapur, Solapur, Chandrapur, Latur, Aurangabad, Amaravati and Jalgaon.

Although the Mumbai has not been the part of pilot project due to traffic congestion issue however there is a possibility of including Navi Mumbai in the project.

Besides, cycle track project may be a part of Mumbai’s coastal road and be executed on new roads coming up.