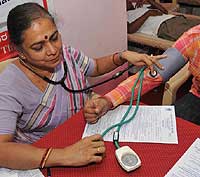 High blood pressure (BP) is a major public health problem in India and its prevalence is rapidly increasing among both urban and rural populations. In fact, hypertension is the most prevalent chronic disease in India.

“The biggest problem with hypertension is that there are no symptoms. Thus people tend to be unaware that they have hypertension,” says Ravi Kasliwal, senior cardiac consultant at Medanta – the Medicity.

As per data available, experts estimate that the number of patients in India with high BP is likely to rise from about 140 million in 2008 to nearly 215 million by 2030 along with an increase in the risk of complications such as heart attacks, strokes, kidney problems and other serious illnesses.

Given the seriousness of the problem, WHO has selected hypertension as its theme for 2013.

High BP is, however, both preventable and treatable. For many people, lifestyle changes such as cutting down on salt, eating a balanced diet, avoiding harmful use of alcohol, getting regular exercise and avoiding tobacco use are sufficient to control blood pressure.