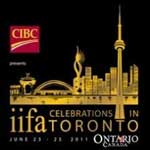 Arshad Warsi and Sonu Sood were quickly whisked away by IIFA organizers in waiting vehicles.

As all 17,000 tickets for the Awards finale sold in minutes, organizers have warned fans about fake tickets being sold for the sold-out event.

This is definite that frenzied scenes can be witnessed at the Toronto’s airport terminal.

The event, to be held between 23 and 25 June, will see the screening of 20 Bollywood films including Chak De India, Hera Pheri, Dabangg and Dil To Pagal Ha among others in Toronto and its sister cities of Brampton, Mississauga and Markham.

“With a number of film briefings taking place, the media will be privy to sneak previews of some highly anticipated films including Love Breakup Zindagi, Aazaan, Politics of Love and Tell Me O Khuda,” IIFA organisers said in a statement.

The International Indian Film Academy (IIFA) Awards, are presented annually by the International Indian Film Academy to honour both artistic and technical excellence of professionals in Bollywood, the Hindi language film industry. Instituted in 2000, the ceremony is held in different countries around the world every year. This award ceremony has been organised by Wizcraft International Entertainment Pvt Ltd – one of India’s premier event management and entertainment agency – since its inception.