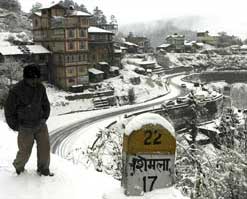 The state capital Shimla was experiencing intermittent snow fall since this morning, accompanied by strong velocity icy winds and sleet, causing sharp fall in minimum and maximum temperatures which dipped to 3.6 degree and 8.6 degree C respectively.

Jakoo, the highest peak in Shimla and adjoining tourist resorts of Kufri, Fagu and Narkanda recorded 10 cm to 30 cm of snow.

The mid and lower hills were lashed by intermittent rains accompanied by strong velocity winds and day temperatures plummeted throughout the state.

As of now, the maiden snowfall has brought cheer to hoteliers and others associated with the tourism industry. But weather officials said it would be difficult to predict whether Shimla will get snowfall on Christmas.