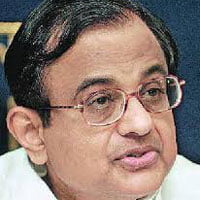 Former Finance Minister P Chidambaram has said that the RBI’s decision to keep interest rates unchanged was expected and the government should build on what has been achieved.

He said in a statement that it was natural for the RBI Governor to await the Budget and the stance of the government on fiscal consolidation.

Chidambaram, however, wondered whether the new BJP-led National Democratic Alliance government would move on the path of fiscal consolidation or allow the fiscal deficit to rise.