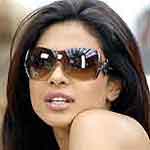 Priyanka Chopra – an Indian film actress – gave two big hits last year – Fashion and Dostana, and is one of the most sought after actresses for brand endorsements, according to a survey.

Adex India (A media monitoring company ) revealed that Priyanka Chopra is the queen of endorsements and is ranked second on the list of top-notch brand ambassadors of 2008 only after Shah Rukh Khan.