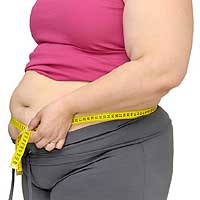 Phytolacca berry, commonly called Poke Root, acts as a good remedy for Obesity. This plant works on the fibrous and lipomatous tissues of the body.

This is regarded as one of the most important of indigenous American plants, and one of the most striking in appearance. The perennial root is large and fleshy, the stem hollow, the leaves alternate and ovate-lanceolate, and the flowers have a white calyx with no corolla. The fruit is a deep purple berry, covering the stem in clusters and resembling blackberries.

The young shoots make a good substitute for asparagus, and poultry eat the berries, though large quantities give the flesh an unpleasant flavor, also causing it to become purgative, when eaten.

In Portugal the use of the juice of the berries to color port wines was discontinued because it spoilt the taste. The stain of the juice is a beautiful purple, and would make a useful dye if a way of fixing it were found.

A decoction of the roots has been used for drenching cattle.
As found in commerce the roots are usually sliced either longitudinally or transversely, are grey in color, hard and wrinkled. It is inodorous, and the taste is acrid and slightly sweet.

It is often used to adulterate belladonna, but may be recognized by the concentric rings of wood bundles in the transverse section. The leaves are used for the same purpose, requiring microscopical identification.

The parts of the plants used are dried roots, berries and leaves. These parts contain certain active principles-
*Phytolaccic acid has been obtained from the berries, and tannin.
*In the root a non-reducing sugar, formic acid, and a small percentage of bitter resin have been found.
*The alkaloid Phytolaccin may be present in small quantities, but it has not been proved. A resinoid substance is called phytolaccin. The virtues are extracted by alcohol, diluted alcohol, and water. The powder is said to be sternutatory.
*Treterpenoid Saponins- the phytolaccosides A, B, C , D &E, based on Aglycones, Phytolaccaginin and Phytolaccic Acid.
*Lectins- mixture known as poke weed mitogin, consisting of series of glycoproteins.

A slow emetic and purgative with narcotic properties. As an alterative it is used in chronic rheumatism and granular conjunctivitis and obesity. As an ointment, it is used in psora, tinea capitis, favus and sycosis, and other skin diseases, causing at first smarting and heat.

The slowness of action and the narcotic effects that accompany it render its use as an emetic inadvisable. It is used as a cathartic in paralysis of the bowels. Headaches of many sources are benefited by it, and both lotion and tincture are used in leucorrhoea.

As a poultice it causes rapid suppuration in felons. The extract is said to have been used in chronic rheumatism and hemorrhoids.

Phytolacca has a powerful effect on fibrous and osseous tissues of the human body. Tincture of Phytolacca Berry is used in the treatment of obesity – William Boericke, an eminent homeopath of international repute.

Phytolacca berry tablets and mother tincture are commonly used homoeopathic medicine for weight loss. Research has shown that it acts by increasing basal metabolic rate(BMR)and also has no side effects when used. Small researches have been conducted in various institutes showing very good results of this wonder plant on obesity. Larger and more scientific data and researches are required to know its detailed values.