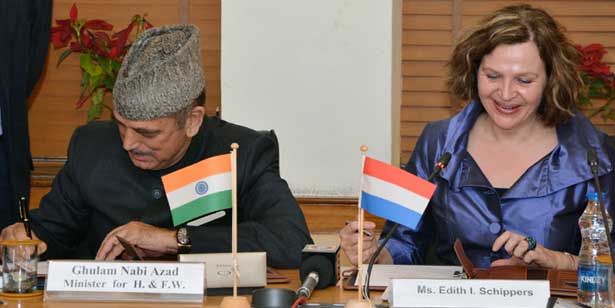 India signed a MoU with The Netherlands in the field of health and medicine to strengthen bilateral cooperations. The MoU was signed by the Union Health and Family Welfare Minister, Shri Ghulam Nabi Azad and Ms. Edith I Schippers, Minister of Health, Welfare and Sport, Kingdom of the Netherlands.

Speaking at the occasion Sh Azad said that development and strengthening of cooperation between the two countries will result in mutually beneficial exchanges in the areas of communicable diseases; anti-microbial resistance; public health policy; health systems strengthening including e-health and governance; medical equipment and pharmaceutical products; and life sciences and medical technology.

Under the agreement both countries can also encourage greater research collaboration between universities, foundations, industry and the health services in both the countries, he noted.

Shri Azad said that this is a very positive development and a step forward from the sectoral MoU between respective food regulatory authorities in the area of food safety. He expressed his happiness that the United Nations has recognized the important role of health in the next generation of global development goals beyond 2015, suggesting an illustrative goal of “Ensuring healthy lives”.The agreement coincides with the on-going debate on the development goals the global community should set next, he added.

Ms. Edith I Schippers, Minister of Health, Welfare and Sport, Kingdom of the Netherlands had visited New Delhi in May 2012, when discussions were done on possibilities of co-operation in public health and drug regulatory mechanisms. That was followed by Shri Azad’s visit to Netherlands in October 2012 to attend the Ministerial Conference on “Responsible Use of Medicines & Anti-Microbial Resistance” at Amsterdam. Since then, there has been substantial progress to address the twin issues of rational use of medicines and the anti-microbial resistance. Speaking at the signing, Ms. Edith I Schippers said that this MoU will strengthen ties between the two countries in the areas of health. She stated that the Netherlands has experience of PPPs in health; the two countries can cooperate in this area to learn from the experiences of both.

If homeopaths or ayurvedic or AYUSH doctors/researchers can prove substantially significant benefits of AYUSH in Anti-Microbial Resistance, then we have jobs in Netherlands surely.