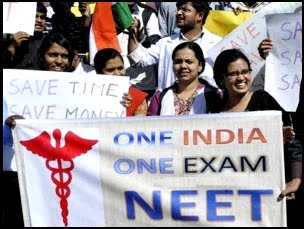 Health Minister Ghulam Nabi Azad has written to the Prime Minister justifying the need for retaining the common entrance test (NEET) for admissions to MBBS, BDS and PG courses in all medical colleges, in the midst of a controversy over a Supreme Court decision to scrap it.

Azad said that students seeking admission in graduate and post graduate level medical courses and their parents had to suffer from mental, physical and financial hardships under the admission scheme followed till last year.

Also, multiple entrance examinations conducted by various agencies have given rise to differential standards for admission to MBBS/PG courses compromising the merit component, he said.

Azad said that his ministry has been working on creating a more robust environment for admissions to medical and dental courses across the country by introducing a single window entrance test.

He added that it would be in the larger interest of society and of students aspiring to study medicine to have NEET.

It has been made clear that no reservation policy followed by minority institutions or state governments would be affected by a NEET based admission process, he stressed.

With the support from the dissenting judgement of Justice Dave, Health Ministry has decided to file the review petition and has also sought the advice of the department of Legal Affairs in the matter, the Minister said in his letter.

In a majority verdict, the Supreme court had scrapped NEET on 18th July. In a dissenting judgement, Justice A R Dave had upheld the Medical Council of India’s decision to conduct this common entrance exam saying that holding of NEET is “legal, practical and need of the society.”