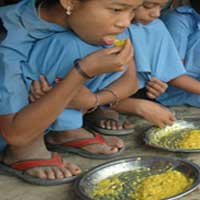 On 16 July 2013, many school children died and dozens more fell ill after eating a contaminated meal at the Dharmashati Gandaman primary school in the Mashrakh block of Saran district, Bihar, India. Preliminary inquiries suggest that a high level of organic phosphorus content in the meal could have caused the deaths of the children at Gandaman Primary School.

Around 50 children were rushed to hospitals in Chapra as they fell sick after having a meal of rice, dal, potato and soya bean.

Sixteen of them died in Chapra itself.

Another four died en route to the Patna Medical College and Hospital.

20 children died – Principal Meena Devi and her husband fled as children began fainting after eating the school’s daily midday meal of rice, potatoes, soybeans and lentils in the eastern state of Bihar.

On Wednesday, Education Minister P.K. Shahi claimed that political conspiracy to destabilise the government was behind the incident which occurred on Tuesday. “It is clear that the food contained poison. According to doctors, judging from the vomit, organic phosphorus was the cause of poisoning. Forensic tests will determine what form of the chemical was present in the food,” Mr. Shahi told reporters.

The police have filed an FIR against the headmistress and other unknown persons.

The HRD Minister has described the death of the children in Bihar as unfortunate. Several children at a School in Saran district in Bihar yesterday died after taking the Mid Day Meal. Talking to the reporters, Dr. M.M. Pallam Raju said, that Mid Day programme is integral part of the Sarv Shiksha Abhiyan as it helps in bringing the children to schools and retaining them. He said, a senior official of the Ministry is already in Bihar to personally know the facts. Giving the details of the incident, Dr. Raju said, Rice, Daal and Soyabean was served to children. As per norms, at least two people, should have tested the food before it was served to the children. FIR has been lodged against the Head Teacher of the school. Emphasizing the role of monitoring of the scheme, the HRD Minister said, that effort are on to further strengthening the monitoring of system. On NGOs participation in the scheme, the Minister said, the experience has been good.

This is the largest programme of this kind in the world. About 11 crore children are served Mid Day Meal in the 12 lakh government schools.

Meanwhile, the Secretary (School), Sh. R. Bhattacharya spoke to the Chief Secretary of Bihar. The State government has been asked to submit report on this incident.

Authorities say 23 children between the ages of 5 and 12 died from eating the lunch, and at least 24 remain hospitalized with severe food poisoning.

Children in many schools across Bihar on Thursday refused to eat lunches served as part of the program.

Autopsies conducted Thursday confirmed that the children had died from ingesting insecticide, though investigators were still trying to determine how the chemicals got into the food. Officials said the insecticide may have been in the food or the cooking oil used to prepare the meals Tuesday.

The HRD Ministry has announced setting up a new committee to go into the quality aspect of the Mid Day Meal Scheme nationwide. This was announced by the HRD Minister Dr. M.M. Pallam Raju New Delhi today while responding to the queries of the media on death of children in Bihar after taking Mid Day Meal in schools. Insisting that this incident should not be used for blame game, Dr. Raju said the Mid Day Meal Scheme is very important for promoting primary education in the country. Replying to the questions, he accepted that Bihar was alerted about unsatisfactory quality of food served in government schools in 12 districts and the worst affected Saran district was one of them.

The incident has raised doubts among many Indians about the safety of food served in such lunches, part of a long-standing government-funded program to provide meals to 120 million poor schoolchildren across the country.