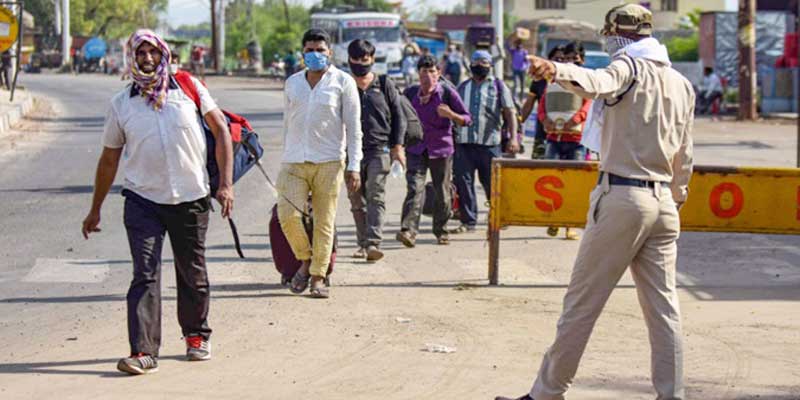 Nationwide Lockdown since 25th March has helped considerably in containing the spread of COVID-19.

The fourth phase of lockdown will however witness substantial relaxations than its previous versions.

Government has allowed the States and Union Territories to demarcate Red, Orange and Green Zones.

In the current phase of lockdown, States and Union Territories will be able to delineate districts, sub-divisions or even municipalities into the three different zones based on parameters shared by Union Health ministry.

This measure would help the States in extending the relaxations in larger parts.

The containment zones will be located within the Red and Orange zones with a small part of the area also demarcated as buffer zone.

With directions of extra caution for the buffer zones, Government has directed that no activities, except for medical and essential supplies to be allowed in the containment zones.

Home Ministry has put out a list of activities which will remain prohibited throughout the country till the next 14 days.

Center has emphasized that despite widespread relaxations given in lockdown restrictions, States and Union Territories cannot dilute the restrictions imposed in the Home Ministry’s guidelines.

In a letter to State Chief Secretaries, Union Home Secretary Ajay Bhalla, however, said based on their assessments, the States and UTs may prohibit certain other activities in various zones or impose restrictions, as deemed necessary.

Mr. Bhalla asked them to ensure compliance of new guidelines and direct all concern authorities for their strict implementations.

He said the guidelines for the fourth phase of the lockdown are issued after taking the views of the states, following a video-conference held by Prime Minister Narendra Modi with chief ministers.

He said under the new guidelines effective from today, the states and Union territories will categorise red, orange and green zones taking into consideration the revised guidelines issued by the Union Health Ministry.

All domestic and international air travel of passengers except for medical or security services shall remain prohibited even in the fourth phase of lockdown.

This, however does not include the flight operations permitted by Home Ministry for select purposes.

Except for Shramik Special, few other Special Trains, Parcel and freight Trains, the railways as well will not resume it’s compete passenger operation.

Metro Trains, too will have to wait in the fourth phase of lockdown. School, Colleges, educational, training and coaching institutions will also remain shut nationwide. People will have to wait atleast for the next 14 more days before going out to a restaurant, hotel or for any such hospitality service as they continue to remain closed. However, for the ease of passengers, eateries and canteens have been permitted to operate at railway stations, airports and bus depots.

Cinema halls, Gymnasiums, Shopping malls, entertainment parks or any such high gathering places will remain prohibited nationwide. Public gatherings of any kind, including political, social and cultural congregations will not be allowed anywhere as a measure of caution. Access to places of worship and religious gatherings as well remain strictly prohibited.

Night curfew, barring for essential work, will continue to remain in force from 7 in the evening till 7 in the morning till 31st May.

Other than the nationwide prohibited activities, State and Union Territories will decide on all other activities to be allowed in the three demarcated zones. They will also decide on resuming the Intra-State bus and other vehicular services. As far as Inter-state movement of buses and vehicles is concerned, consent of both the concerned states will be necessary.

Apart from these fresh relaxations which will allow majority of the shops to be opened up, government has also allowed opening up of sports complexes and stadiums. Spectators would, however, be not allowed at these places. Online and distance learning is permitted and steps will be taken to encourage it further. Home delivery of food items from restaurants will also continue as before.

Government has urged the employers to ensure at large that Aarogya Setu App is installed by all employees in their mobile phones.

Government has also advised people above 65 years of age or with co-morbidities, pregnant women, and children below the age of 10 years to stay at home till the lockdown is in place.