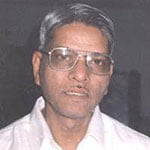 This 20th November was the 11th death anniversary of Dr. M. L. Agrawal, a distinguished homoeopath and a man of ethics, after 32 years of relentless work for homoeopathy, left for heavenly abode on 20/11/2000. I would appreciate all sincere efforts by the community, Delhi Government and Dr Pankaj Aggarwal. I feel, this is a true honor to homeopathy science also.

Dr. M. L. Agrawal was born on November 3, 1937. His father’s name was Shri Nannoo Mal Agrawal, a businessman and mother Shrimati Rukhmani Devi. His mother died when he was only 3 years old, and at this tender age, was exposed to the hardships of life. He started his career as a clerk in ‘Employment Exchange’, and within a very short time became renowned for his ability to teach stenography. He then went on to work in Railways, where he remained for 25 years. Here also he was admired by his fellow workers and superiors for his meticulous and up-to-date work.

During his service life, once he came down with cold and coryza. He could not be treated successfully by the then prevalent system of medicine and remained troubled by this problem for a long time. Ultimately, he was cured by Dr. N. C. Banerjee, one of the great followers of Homoeopathy, with Nux vomica. During his treatment, he noticed an initial aggravation of all his symptoms followed by a lasting recovery. He felt so impressed by the homoeopathic system of treatment that he requested Dr. Banerjee to teach him this unique art of healing. Once adopted by the great soul and successful homoeopathic physician- Dr. N. C. Banerjee, there were never ending stories of people being benefited and cured by him in India and overseas.

Dr. M. L. Agrawal graduated and registered as a homoeopathic physician with the Punjab Council of Homoeopathy in 1970, and started a successful career in Homoeopathy.

From the very beginning, Dr. M. L. Agrawal was linked with Homoeopathic Medical Association of India (HMAI). He worked under the guidance of Dr. Jugal Kishore for some years and formed the Asian Homoeopathic Medical League (AHML), and a local organization, ‘The Progressive Homoeopathic Society’, especially to encourage and help students and neo-homoeopaths.

In 1990, he attended a conference of OMHI in Mexico, where he was given silver medal for his contributions to homoeopathy. In the very year, he presented a case report of prostate cancer named “Mind and Cancer- a Hidden Link”, in British Homoeo Journal, London, which was declared as the best paper.

Dr. M. L. Agrawal was the author of several books: