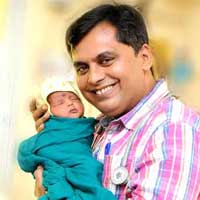 An Indian doctor is on a unique mission to save the female child – he waives his fee if a girl is born in his hospital. This is reported by Geeta Pandey of Pune in BBC News recently.

Dr Ganesh Rakh calls it his “tiny contribution” to improving the lot of the girl child in a country where a traditional preference for boys and an easy availability of antenatal sex screening has resulted in a skewed gender ratio.

Dr Ganesh Rakh says the 2011 census figures made him realise how skewed India’s gender ratio was. According to the latest census figures released in 2011, that figure has dropped to a dismal 914.

Dr Rakh, who started a small hospital in the western Indian city of Pune in 2007, says that whenever a pregnant woman came for her delivery, all her relatives would come with the hope that the baby would be a boy.

See the spirit of this Indian, I am sure this story would inspire other doctors in Indian states where girl/boy child ratio is really distorted.

States where gender ratio in India need attention as per SRS Statistical Report 2012: