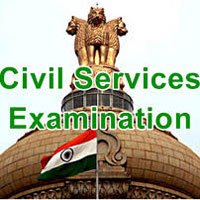 The final results of Civil Services Examination, 2013 has been declared on 12th June, 2014. The following are the important highlights of the results:

Ø The Civil Services (Preliminary) Examination, 2013 was conducted on 26th May, 2013. A total number of 7,76,565 candidates applied for this examination, out of which 3,23,949 candidates actually appeared and 14959 candidates were declared qualified for appearance in the Written (Main) Examination.

Ø Written exam was held in December, 2013 and based on their performance, 3003 candidates were shortlisted for the Personality Test which was conducted in April-June, 2014.

Ø Finally, 1122 candidates ( 861 males and 261 females ) including 30 are Physically Handicapped candidates ( 15 orthopedically challenged; 07 visually impaired and 08 hearing impaired ) have been recommended for appointment to the IAS, IFS, IPS and other Central Services against 1228 reported vacancies.

Ø Sri Gaurav Agrawal (Roll No.249085), a male candidate, has topped the Civil Services Examination, 2013 with Economics as his optional subject. He has graduated with B.Tech. (Computer Science) degree from IIT, Kanpur and PGDM from IIM, Lucknow. This was his second attempt.

Ø The second ranker is Sri Munish Sharma (Roll No.016290). He has graduated with degree in B.Sc. (Biochemistry) from Sri Venkateswara College, Delhi University. This was his second attempt.

Ø Dr. Bharti Dixit (Roll No.026831), is the topper among female candidates. She has secured overall fifth rank. She has done MBBS from LHMC, New Delhi. This was her first attempt.

Ø Amongst the top 25 candidates, 24 took the Examination in English and one in Kannada medium.

Ø Out of the top 25 candidates, 5 have made to the merit list in their first attempt, 11 in second attempt, 7 in third attempt, 2 in fourth attempt.

Ø The result also showcases the pan-India distribution of successful candidates of this Examination. Among the top 25 candidates, there are candidates claiming domicile from as many as 11 States/UTs; Bihar, Delhi, Haryana, Jharkhand, Karnataka, Kerala, Madhya Pradesh, Maharashtra, Odisha, Rajasthan and Uttar Pradesh.

Ø Of the Top 25 candidates, 20 appeared from Delhi; two from Jaipur and one each from Lucknow, Bangalore and Chandigarh Centers.