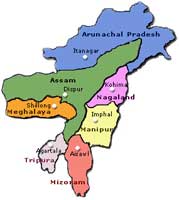 The Indian Ministry of Tourism has undertaken some essential steps to focus on the tourism potential of (including religious spots) the North Eastern region of India.

ii. A separate section on the North Eastern region included on the promotional website of the Ministry of Tourism www.incredibleindia.org.

iii. The North Eastern region has been the theme of the India Pavilion at the South Asian Travel & Tourism Exchange (SATTE) organized annually in New Delhi for the past few years.

Development and promotion of tourism including religious tourism, are undertaken primarily by State Governments/Union Territory Administrations. The Ministry of Tourism, Government of India, however, extends financial assistance to  State Governments/Union Territory Administrations for tourism related projects  identified in consultation with them under various tourism schemes of the Ministry and subject to availability of funds.