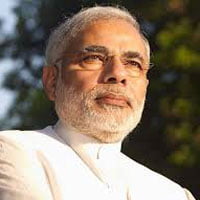 Prime Minister Narendra Modi met his Council of Ministers at his residence yesterday. In the meeting, he understood to have told them to work for efficient governance and time-bound implementation of the work undertaken, by ensuring that the benefits should reach the people.

AIR correspondent reports that at the meeting Prime Minister talked about his ideas on how to boost the economy, attract greater investment and improve infrastructure.

Mr. Modi asked the Ministers to come up with progress report on various projects initiated by the previous UPA government. He also emphasised that all the 45 Ministers and Ministries should work cohesively with synergy for the country’s development.

The Prime Minister also reportedly asked for inputs on President Pranab Mukherjee’s address to the joint sitting of Parliament.