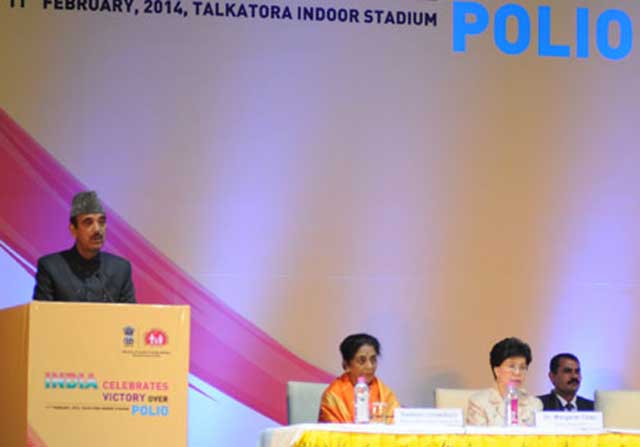 In his address, the President of India, Shri Pranab Mukherjee said that he salutes each and every person who has made this day possible. He said that this is a day of victory celebrations, and victory of humankind, where millions of lives have been saved through tireless efforts of many. He said that the real warriors are the ones who have made it possible which include the various coordinators, supervisors, parents, children, vaccinators and more. This has been possible through strong determination, involvement of all sections of the society, and the political leadership. He said that various organizations across the borders have given support to this achievement of India. This couldn’t have been possible without team effort, he said. This is a milestone towards universal health care in the country, the President stated.

The Prime Minister while speaking at the function stated that this was truly a historic day. This is no ordinary achievement, he said. The impressive achievement can be attributed to strong political will, assured financial commitment and to robust oversight of the strategy adopted by the government, the Prime Minister said. He stated that this demonstrates that polio can be eradicated despite many obstacles and adverse circumstances. He said that our success in eradicating polio has made us more confident of achieving our objectives.

Speaking at the occasion, the Union Minister for Health and Family Welfare Shri Ghulam Nabi Azad said that it is a matter of great pride that the Indian virus has been completely stamped-out from the country. This landmark achievement rides on the confidence generated by the strategic investments made under NRHM. Virtually every child in the country was reached with the new indigenously developed bivalent polio vaccine, he noted.

The Health Minister stated that 19 years ago in 1995, the disease used to cripple more than 50,000 children in the country every year. Soon the number of polio infections reduced but eradicating polio was nowhere in sight. In 2009, India had half the number of polio cases in the world. By 2011, in less than two years time India brought polio infections to zero level. The country has sustained that momentous success for more than 3 years now, the Minister stated. Coverage rates soared to more than 99%, involving over a million ASHAs and ANMs, who gave a new momentum to polio rounds along with the 2.3million strong team of polio volunteers and 150 thousand supervisors, the Minister added. The Health Minister thanked the lakhs of tireless volunteers, supervisors, ASHA and ANM workers, health department officials, the political leadership in the country at the centre and the states, officials of the Ministry of Health and Family Welfare, the parents and children as well as the religious leaders and community mobilizers without which this feat would not have been achieved.

Smt Sushma Swaraj, Leader of Opposition in the Lok Sabha, said that through this achievement India has surpassed all apprehensions and challenges. She congratulated the Health Minister and the Ministry officials and the several lakhs of volunteers, vaccinators and committed workers who have made this day possible.

Speaking at the occasion Smt. Sonia Gandhi, Chairperson, NAC that the victory of the nation over polio is an extraordinary success. It is unmatched in scope and extent anywhere in the world, she said. This has been possible through team work, highly creative communication strategy which worked to dispel myths and fears and stimulated communities. She congratulated the lakhs of workers who have made this possible saying that they have played a pivotal role in motivating people.

Congratulating the country for its monumental achievement, Dr Margaret Chan, Director-General, World Health Organization, said, “India has shown the world that there is no such thing as impossible. This is likely the greatest lesson, and the greatest inspiration for the rest of the world.” She attributed this to world class health surveillance systems in India which she said not only meet international standards, but surpass them. She stated that India met the challenge of eradicating polio through creativity and innovation. India has set an example for other countries to follow, she stated. Despite the many adversities and challenges, India’s triumph and monumental success is a decisive proof that this achievement is possible.

UNICEF India Representative Mr Louis-Georges Arsenault said that “India’s success is the success of every child who will grow up free from polio. It is also the world’s success – proof positive that we can defeat the scourge of polio, even in places once thought impossible” . Whereas President, Rotary International, Mr Ron D Burton, said that “By providing the leadership, planning, innovation, and resources to get the job done – the Indian Government has demonstrated how to lead by example. And now we are applying the lessons and best practices learned here to stop the disease in the remaining polio endemic countries”.

Also present at the occasion were the key polio partner agencies, representatives of various other partners and donors, and ambassadors of various countries, which supported the India’s fight against polio, over 1,000 representatives from the field – the vaccinators from across the country, the social mobilisers, the surveillance medical officers and the health department officials – who were undeniably the key players in India’s proud story of victory over polio.