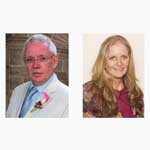 On December 15, in a webinar Drs. Frans Vermeulen Lina Johnston will discuss recently published comprehensive work by them: Plants – Homeopathic and Medical Uses from a Botanical Perspective. This highly acclaimed and long awaited work details over 2000 individual plant remedies classified in 150 botanic families.

Drawing on a wealth of information from provings, clinical observations, herbal uses, folklore, mythology, botany, personal accounts, toxicology and other sources, the authors weave an in-depth, coherent picture of each botanic family and its members. Family themes and organ system affinities will be discussed, supported by the plants’ chemical composition, physiological and pharmacological effects.

Frans Vermeulen graduated from teachers training college in 1970. He worked as a schoolteacher until 1978 and had already started to study homeopathy at Stichting Klassieke Homeopathie in Den Haag. He continued to study homeopathy until 1983 although he had been running his practice since 1979.

In 1990 he was appointed managing director, teacher, and administrator of The School of Homeopathy in Holland. In 1992 he wrote Synoptic Materia Medica 1 which originally emerged from remedy summaries made for the students in Holland, Ireland and Finland.

He followed this one up with the Concordant Materia Medica published in 1994. Followed by a second edition of the Concordant, including Hering’s Guiding Symptoms in 1997; a third edition was printed in 2000.

Out of his special interest in the small remedies, Frans wrote Synoptic Materia Medica 2. In his recent Materia Medica tour de force entitled PRISMA, he introduces us to data from numerous non-homoeopathic sources as both reference material for the homoeopathic materia medica and as the source of potential symptoms. The significance and potential of such external data has been the subject of his numerous seminars in Europe, Israel and Australia.

And finally, in 2005, Frans published an astounding 800 page book focused on the Materia Medica of bacteria and viruses, entitled Monera. He followed it early in 2007 with volume 2, another heroic work of scholarship on Fungi.

Linda Johnston, MD, has been a active member of the homeopathic community worldwide since the inception of her homeopathic practice in 1986.

After completing her medical training from the University of Washington in 1979, she had one further year in family medicine.

She started her own private medical practice in 1981. Linda began her homeopathic training in 1986, and began practicing the same year. Linda’s main focus has always been her clinical practice of homeopathy, which she continues to this day.

Contributing to the homeopathic community through writing and teaching are both important to Linda. From 1991 – 1996, she developed and taught a two-year homeopathy curriculum in 4 different US cities to train licensed medical practitioners. She is also a well-known teacher internationally.

Author of numerous articles for homeopathy journals, Linda is also the author of the scholarly, Additions to the Homeopathic Repertory from Kent’s Lectures on Homeopathic Materia Medica, as well as a popular book for the general public, Everyday Miracles: Homeopathy in Action.

Since her debut public lecture in 1987, she has made hundreds of radio, television appearances, in addition to print media interviews educating the public about homeopathy.

Linda’s current projects include a book on the treatment of children using the new techniques in homeopathy, A Child’s World, expected to be published in March 2010. Additionally, she is co-authoring, with her husband Frans Vermeulen, a comprehensive work on plants and plant families.