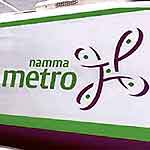 Bangalore metro will open to public from 4 p.m. Thursday. The Metro service will run between 6 a.m. and 10 p.m.

Bangalore has taken a step towards solving its most pressing urban infrastructure problem with the launch of the Metro rail service – India’s third such after Kolkata and Delhi.

In the first phase, Bangalore Metro Rail Corporation Ltd (BMRCL) will run the services on seven-km stretch metro rail from Mahatma Gandhi road to Byyappanahalli from morning to late evening. The service will connect the city centre to the eastern suburbs and will run on elevated tracks.

Residents hope the metro will ease traffic congestion in the city which has become India’s IT hub. Built at a cost of Rs. 6000 crore, at least 20,000 people are expected to use the services each day.