In August 2013, Asaram was accused of sexually assaulting a 16 year old girl at his ashram in Jodhpur on the pretext of exorcising her from evil spirits. Last week, a 16-year-old girl alleged that Asaram Bapu had sexually assaulted her in his Jodhpur ashram. This is the first time the godman has been directly implicated.

Asaram Bapu has dismissed the girl’s allegations and said accusations were a conspiracy orchestrated by others to tarnish his image.

The girl had alleged that the godman had sexually assaulted her at a farmhouse in Jodhpur on independence day and had filed a FIR at New Delhi’s Kamla Market police station a few days later. Based on the complaint, the Delhi Police booked Asaram under IPC sections 342 (wrongful confinement), 376 (rape), 506 (criminal intimidation), besides sections of the Juvenile Justice Act and the POCSO Act, on August 21.

The case of allegations of sexual assault was later transferred to the Jodhpur police.

Soon after a criminal petition was filed against rape accused Asaram Bapu at the Rajasthan High Court, the controversial godman headed straight for his ashram in Indore in his private jet.

A team of Rajasthan police is on its way to Indore to question godman Asaram Bapu who has been charged with raping a minor.

On Sunday, Sikhs had set afire an effigy of Asaram in Indore, while some Buddhist monks did the same in Bhopal to protest against the godman and his spokesperson Neelam Dubey for equating Asaram with Lord Buddha and Guru Gobind Singh.

According to reports, another organization – Anusuchit Jati Yuvjan Sabha – took out a mock funeral procession of Asaram in Madhya Pradesh’s Ratlam district and torched his effigy.

Asaram, who was to appear before the Jodhpur police by Friday evening for questioning in the case, failed to make it, with his son claiming that he had been taken ill. “Bapu has booked a flight ticket to Delhi. He can’t fly now due to his ill health. He will appear (before the police) as soon as he gets well… He will cooperate with interrogators,” Asaram’s son Swami Narayan Sai said in Bhopal.

Religious preacher Asaram Bapu, who was arrested late on Saturday night from his ashram in Indore in Madhya Pradesh, has been brought to Jodhpur, where he is accused of sexually assaulting a school girl. 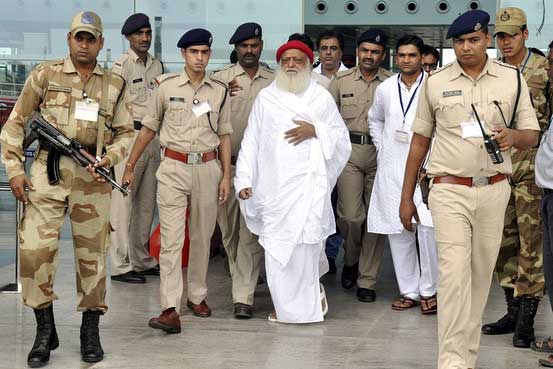 Asaram Bapu was on Sunday subjected to a “potency test”, which confirmed that the 72-year-old’s libido is active. He was made to take the test after he told cops that he was impotent and therefore incapable of committing the crime he was charged with.

Asaram was questioned for four hours at RAC headquarters and then produced in a court that sent him to one-day police custody.

A team of doctors from Jodhpur’s Sampurnanand Medical College had declared Asaram completely fit. “He is perfectly ok…mentally and physically fit…(his claim of having a neurological illness) has been proved to be a lie,” DCP Jodhpur Ajay Pal Lamba told reporters.

Asaram Bapu was behind bars on Monday after he was remanded in 14-day judicial custody by a local court. The religious preacher remained in the court for about 15 minutes before he was taken to Central Jail of Jodhpur near Mohanpura bridge in a convoy of police vehicles after the court order. He was lodged in Barrack No.1. 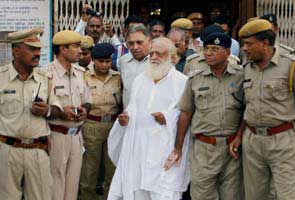 Police said it did not seek extension of police remand as their course of initial investigation and questioning was over. “Our investigation was complete so we did not seek for extension of the police custody. The accused has cooperated with us,” DCP Ajay Lamba told reporters after the hearing. “Our case is very strong and we have vital evidences against the accused. We are moving in the right direction. We will file chargesheet in the case soon,” he added.

The counsel for Asaram, meanwhile, moved an application for bail and hearing on the plea is expected tomorrow. “We have filed a bail application in the same court. The hearing is scheduled tomorrow at around 11am,” Pradeep Chaudhary, an advocate for the religious leader, told media.

72-year-old Asaram taken to the Jodhpur central jail and was offered a “chatai” or reed mat, a blanket and a mug for his prison stay. “He is fine and is being treated as a usual prisoner,” a jail official told IANS.

Asaram Bapu has requested officials that he should be allowed to perform “satsang” (collective prayers) in the prison every morning. “We are considering the request as it would be a good recreation for other prisoners too,” said the official.

“The FIR against Asaram does not stand as there are several lacunae in it.” “There were some additional inputs in the FIR after MLC (Medico Legal Certificate) conducted on the victim. MLC report does not support the statements made by the girl. Hence, the case does not fall under section 376 (rape charge) of IPC…outraging of modesty is not attracted…it is bailable, and bail should be granted to my client,” Asaram’s counsel K K Menon said.

The hearing on Asaram’s bail plea on Tuesday was put off till the next day by the Rajasthan court.

The Jodhpur (rural) district and sessions judge rejected the bail plea filed by Asaram Bapu on Wednesday. Asaram Bapu will remain in jail till 15 September.

Asaram Bapu’s request for routine diet, gangajal and a special bed besides other facilities were denied by the jail administration. Asaram’s counsel Pradeep Choudhary reportedly said that Bapu had sought facilities such as his routine food which includes herbs and medicines, gangajal, bed, books and some other material required for his prayer.

Asaram Bapu will continue to languish in jail as a court in Rajasthan extended his judicial custody for 14 days. The 72-year-old Asaram was presented before court of district and sessions judge. The court Monday extended Asaram’s judicial remand till Sep 30.

The district and sessions court here on Friday deferred the hearing of bail applications filed Asaram aides – Shiva and Shilpi – till October 9. The prosecution counsel said as judge Manoj Kumar Vyas was not available on Friday, hence “the petition adjourned for hearing till October 9”.

Fresh sexual assault complaints have been registered against controversial self-styled godman Asaram Bapu and his son Narayan Sai in Surat after two sisters accused the duo of abusing them. Asaram, 75, was arrested in August on charges of sexually assaulting a minor girl and has been in prison at Jodhpur in Rajasthan since then. Surat Police Commissioner Rakesh Asthana said today that the complaint against Narayan Sai has been registered at Jhangirpura police station in Surat, while the one against his father Asaram has been transferred to Ahmedabad as the alleged incident happened there.

In Rajasthan, a Jodhpur Court has extended the judicial remand of Asaram till the 25th of this month.  Asaram was produced before the court today after the expiry of his earlier remand.  Judicial custody of others accused in the case  Shilpi, Shiva, Sharad and Prakash was also extended till 25th of this month. The District and Sessions Court of Jodhpur is hearing another case today relating to Asaram and his son Narayan Sai in which the Gujarat police has sought their custody in connection with a sexual assault case filed by two sisters from Surat.

Tainted religious guru Asaram was remanded in police custody till October 19 by a local court in an alleged sexual assault case filed by two Surat-based sisters against him and his son Narayan Sai. Magistrate V A Budh granted the police four days remand against their plea for 14 days custody after he was produced in the court in the morning amid tight security. The 72-year-old religious leader was brought to Ahmedabad last night on a transfer warrant from Jodhpur, where he was in judicial custody on charges of raping a minor at his ashram.

Investigators probing the rape charges against Asaram Bapu have hinted at using a lie detector test as corroborative evidence. Members of the Special Investigation Team (SIT) have got four-day remand for questioning him. J K Bhatt, additional commissioner of police, Sector I, and head of SIT, told media on Tuesday evening that they are finding it difficult to get answers from Asaram. “He isn’t confessing and said that it is all a ploy to defame him from which he will come out clean. He said that he isn’t afraid of the police probe in Jodhpur, is not afraid here either as he has done nothing wrong. He said he knows the victim and added that she is like daughter to him,” he said.