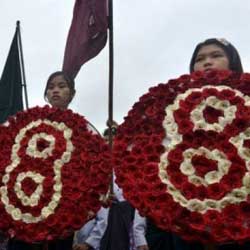 Thousands thronged Yangon on Thursday marking the anniversary of a bloody crackdown on Myanmar rallies 25 years ago, in a historic commemoration urging further democratic reform.

Some five thousand people crammed into a convention centre and thousands more watched large television screens outside to witness a landmark ceremony recalling the huge 1988 student protests that were brutally crushed by the then – junta.

The event, attended by members of the opposition and ruling parties, diplomats and Buddhist monks, comes amid sweeping changes in Myanmar since the end of outright military dictatorship two years ago.

Activists expressed jubilation at the scale of the event, but urged even more people to join in. “The 8888 (as the anniversary is known) is the biggest milestone in our history. It’s unforgettable,” Aye Myint, who joined in the protests in 1988, told a news agency.

A vicious military assault on student-led demonstrations against Myanmar’s military rulers on 8th August, 1988 sparked a huge popular uprising against the junta.

“Many more people should join the event. It’s just a few if you compare with the people who participated in the democracy uprising 25 years ago,” he said.

Hundreds of thousands took to the streets across the country calling for democracy, in protests that came to a brutal end the following month with an army crackdown that killed more than 3,000.

Reforms have included the freeing of hundreds of political prisoners including many jailed for their roles in the 1988 rallies and the welcoming of democracy champion Aung San Suu Kyi and her party into parliament.

She took part in today’s commemorations. She had been living in London but returned to Yangon in 1988 to nurse her sick mother, and was quick to take a leading role in the pro-democracy movement, delivering speeches at Yangon’s Shwedagon Pagoda.

Ko Ko Gyi, a key figure in the 1988 protests and a leader of the 88 Generation activist group said campaigns to push Myanmar further on the path to democracy should maintain “the spirit” of the student rallies.