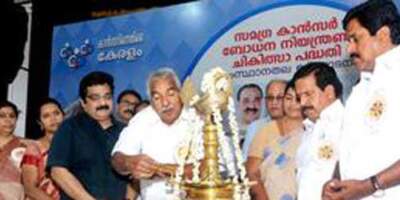 Mayo Clinic reported promising interim results from a Phase II trial of a new combination therapy for patients with recurrent ovarian cancer that is resistant to platinum therapy. Thirty-three percent of study participants achieved either complete or partial tumor regression from the therapy, which combines flavopiridol and cisplatin.

An international team of scientists, supported in part by the National Human Genome Research Institute (NHGRI), one of the National Institutes of Health (NIH), announced that its systematic effort to map the genomic changes underlying lung cancer has uncovered a critical gene alteration not previously linked to any form of cancer. The research, published in the advance online issue of the journal Nature, also revealed more than 50 genomic regions that are frequently gained or lost in lung adenocarcinoma, the most common type of lung cancer in the United States.

A new study appearing in International Journal of Gynecological Cancer states that Bevacizumab, a biologic anti-cancer agent that prevents tumor growth by interfering with the formation of new blood vessels, may have the potential to improve the efficacy of standard combination chemotherapy in ovarian cancer.

In a study published in the Journal of Women’s Health, researchers from the Centers for Disease Control and Prevention and Thomson Healthcare (NYSE: TOC; TSK: TOC) found a distinct pattern of medical signs and symptoms that occurred prior to the detection of ovarian cancer.

Immune system cells recruited by cancers to help them grow and spread could be ‘re-educated’ to attack the tumours instead of aiding them, Cancer Research UK scientists announced at the National Cancer Research Institute (NCRI) Conference in Birmingham.

A new study adds fuel to the debate over whether being fat or inactive affects the risk of developing ovarian cancer. The study, presented by Australian researchers today (Thursday) at the European Cancer Conference (ECCO 14) in Barcelona, found some evidence suggesting exercise might increase the risk. It found no link with body measurements.

Taking the contraceptive pill does not increase a woman’s chances of developing cancer and may even reduce the risk for most women, according to a study published on bmj.com today. However there was an increased risk for women who used it for more than eight years.

In work that could lead to safe and effective techniques for gene therapy, MIT researchers have found a way to fine-tune the ability of biodegradable polymers to deliver genes.