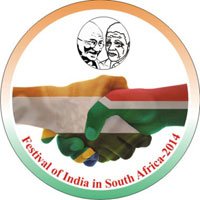 Secretary, Ministry of Culture Shri Ravindra Singh here launched the logo, posters and webpage for the Festival of India in South Africa which will be celebrated from 18th July 2014 to 31st August 2014.

Speaking on the occasion, Shri Ravindra Singh said that India enjoys close and cordial relations with South Africa and that India’s links with the struggle for freedom and justice in South Africa date back to the period during which Mahatma Gandhi started his Satyagraha movement in South Africa over a century ago. Against the background of India’s consistent support to the anti-apartheid struggle, there has been a steady consolidation of our close and friendly ties with South Africa, both bilaterally and through the trilateral IBSA Dialogue Forum.

To mark the occasion of 20 years of end of apartheid regime and the 20th anniversary of the establishment of diplomatic relations between India and South Africa subsequent to the formation of the democratic government in South Africa, Ministry of Culture in collaboration with the Ministry of External Affairs and the Embassy of India in Pretoria are organizing the Festival of India in different cities in South Africa.

The Festival of India in South Africa covers a wide-range of events showcasing Indian performing arts, photo cricket exhibition, interactive Gandhi-Mandela exhibition, literary festival, food festival and film festival. Ministry of Culture Institutions namely Sangeet Natak Akedemi , Kathak Kendra, National Archive of India, Sahitya Akademi and National Council of Science Museums would be participating in the Festival’s events. In addition, the Ministry of Information and Broadcasting and Ministry of Tourism would be participating in the Film Festival and Food Festival respectively.

The Logo for the Festival of India in South Africa

The colourful logo designed for the Festival consists of a handshake – a symbol of trust and friendship that seals a bond between two people, two communities and two nations. The hands are coated in the colours of their respective country. The logo has faces Nelson Mandela and Mahatma Gandhi side by side in a circle. The logo is washed in the colours of India and converts it into one single integrated unit that symbolizes inclusiveness and collective force of all.