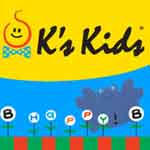 The Ohio Art Company is bringing real magic to developmental toys for infants and toddlers with the release of K-Magic, a new interactive video and game console from K’s Kids.

This new educational learning center features a wide range of fun activities to encourage creativity and keep infants and toddlers playfully entertained throughout the day. K-Magic receives recognition after winning the 2011 Top Toy of the Year award from Creative Child magazine.

Featuring educational cartoons, games, language tools and even music, this new educational entertainment center from K’s Kids, is designed to stimulate a baby’s imagination, while helping to aid in important early childhood developmental areas, including observation, visual senses and logical thinking. With an easy to understand play pattern, infants and toddlers will learn while also enjoying the entertainment offered through the movies and games available with K-Magic.

With K-Magic, infants and toddlers will learn about colors, shapes, numbers, sounds and even the alphabet through interactive game play. An additional feature sure to be a hit with parents and educators is a language game which will allow babies to begin learning from a variety of different languages.

“K-Magic is yet another example of the serious commitment that K’s Kids has made to the creation of toys that are educationally sound, yet entertaining,”

says Martin Killgallon, Senior Vice President with the Ohio Art Company. “Parents will fall in love with K-Magic because of its proven educational benefit and ability to keep a child occupied for long periods of time, while babies will revel in its ability to entertain them in a fun and creative manner,” he adds.

Designed for children up to six years of age, K-Magic is available to leading specialty retailers across the country at a suggested retail price of $199.99.