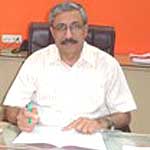 Dr. R.K. Manchanda, has joined as Director General of Central Council of Research in Homoeopathy (CCRH India) on 3rd July 2012. A dynamic person, an able administrator, a researcher, an author and a dedicated homoeopathic clinician, he assumed this new responsibility after handing over the charge of Deputy Director (Homoeopathy), Govt. of Delhi.

During 30 years of his professional career, Dr. R.K. Manchanda served in various capacities in the Government sector. With the vast professional experience and knowledge that he gained, he has an insight for the upliftment of Homoeopathic research. He established 66 new homoeopathic clinics in Delhi along with Delhi Homoeopathic Anusandhan Parishad for undertaking organized research in Delhi Govt. Homoeopathic Institutions. He also extended his support to Nehru Homoeopathic Medical College and Hospital and Dr. B. R. Sur Homoeopathic Medical College, Hospital and Research Center for carrying out various research projects. The hard work has brought laurels to him in the form of ‘State Award’ in 2010 by the Government of Delhi.

Dr. Manchanda has himself undertaken and supervised many research projects and has published papers in peer reviewed international journals and presented papers that include clinical research in the field of Tubercular lymphadenitis, Multiple Drug Resistant TB, Lichen simplex chronicus, fungal infections, warts etc. He has co-authored ‘Textbook of Dermatology for Homoeopaths’ which has been published in English and Spanish.

As Organizing Secretary of the ‘66th Homoeopathic Congress Liga Medicorum Homoeopathica Internationalis’ Dr. R.K. Manchanda successfully managed the mega event organized from 1-4 December 2011 in India, in which about 2000 delegates including 300 from 33 countries across the globe participated and 300 research papers were presented. During this event he was honored with ‘Hahnemann Medal 2011’ by the Institute for the History of Medicine, Robert Bosch Foundation, Germany , for his active participation in Indo-German collaborations.

The staff of the Council extends heartiest welcome to him and hopes to excel further in the field of homoeopathic research under his stewardship.