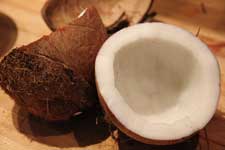 The coconut palm, Cocos nucifera, is a member of the family Arecaceae. It is the only accepted species in the genus Cocos. The term coconut can refer to the entire coconut palm, the seed, or the fruit, which, botanically, is a drupe, not a nut.

Coconut has been traditionally used in Ayurveda, Unani and Siddha systems of medicine as detailed below:-

(i) Ayurveda – Coconut has been used as medicine in Ayurveda in disease conditions such as Burning, Pain, excess thirst, dehydration, bleeding disorders, Acid Peptic etc.

Central Council for Research in Siddha has indicated that Clinical research trials on coconut/coconut oil have been conducted in Siddha system. Coconut oil is used in preparation of 777 oil and Karappan oil which are beneficial in treatment of skin disorders such as Psoriasis and eczema respectively.