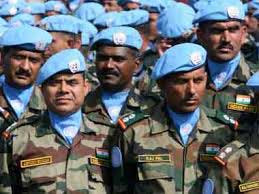 The United Nations honoured 106 peacekeepers, including eight Indian soldiers, who lost their lives in peacekeeping operations.

The International Day of UN Peacekeepers was commemorated at the UN with UN Secretary General Ban Ki-moon laying a wreath at a newly-created memorial for the peacekeepers.

The ceremony was attended by India’s Permanent Representative to the UN Ambassador Asoke Kumar Mukerji and other envoys and military attaches of member states.

Ban presided over a solemn ceremony where the prestigious Dag Hammarskjold Medal, named after the second UN chief, was posthumously awarded to the 106 fallen peacekeepers for their courage and sacrifice in the line of duty.

Mukerji accepted the medal on behalf of the eight Indian soldiers who lost their lives while stationed at UN missions.

Five Indian peacekeepers from the UN Mission in South Sudan (UNMISS) were killed in April last year when they were ambushed by about 200 attackers near Jonglei State as they escorted a UN convoy.

Two Indian soldiers died in action in December last year in Akobo following an assault on a UN base. Another Indian, deployed as a peacekeeper in the UN Organization Stabilization Mission in the Democratic Republic of the Congo, was killed in February 2013.

Mukerji later hosted a commemorative reception where the names of all the 106 peacekeepers were placed along with photographs of the eight Indian soldiers who had died.

The symbolic tribute, an initiative by India and a first, was made to honour those who collectively gave their lives in pursuit of international peace and security.